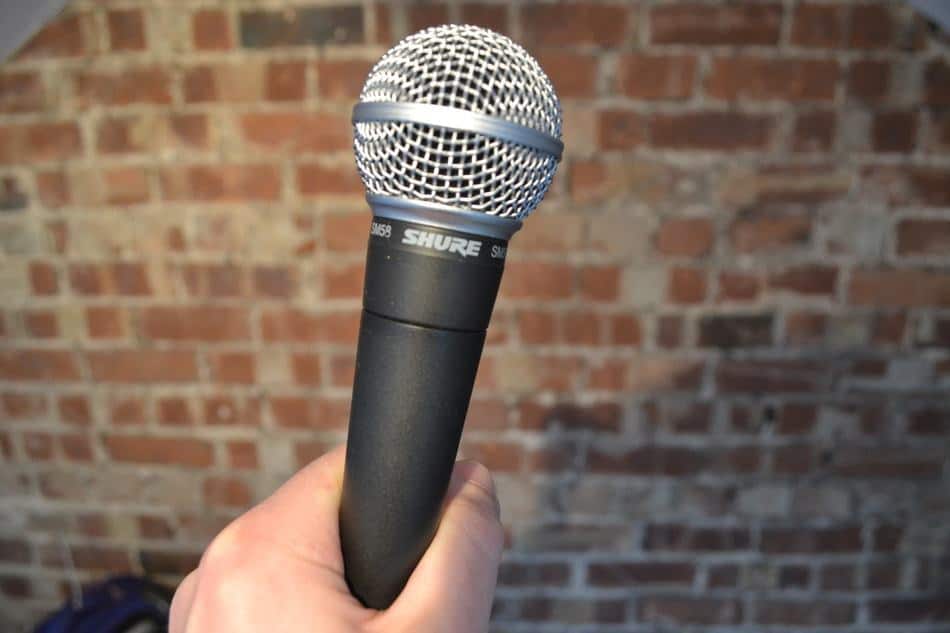 When I first started recording one of the first things I wanted to do was record some simple acoustic guitar and vocals. Mainly because I only owned an acoustic guitar at the time, so I didn’t have much choice. With no line output from my traditional wooden guitar, I knew I would need a microphone to do this.

But when I started to google as to which one I should get, I soon realized it wasn’t that simple. Turns out there are different types of microphone. Two words I came across most often were ‘condenser’ and ‘dynamic’. But what is the difference between dynamic and condenser microphones? Did I need both?

These characteristics all have to do with how they are constructed and how they function. And it turns out they are both great for different reasons. They weren’t just made to confuse me.

In this article, I will try and explain in more detail what I discovered whilst researching this, the conclusions I made, and the microphones I eventually purchased.

Towards the end of the article, I will go through which type of microphone I think is most suitable for different types of instrument and situation.

What does a microphone do?

As per usual I will start with the very basics.

A microphone is used to convert sound waves, which can be created by anything from the human voice to a booming saxophone, into electrical waves that a computer or other recording device can understand.

The way a microphone converts this signal varies depending on the type of microphone.

What is a dynamic microphone?

Cons: not very sensitive to quiet or high-frequency sounds

A dynamic microphone is the oldest type of microphone and is thus the most primitive in terms of design.

In very simplified terms, the sound in a dynamic microphone is created when a sound wave hits a diaphragm (a device usually made of plastic or polyester film used to sense a sound signal) causing it to move.

The diaphragm is attached to a metal coil which is suspended between two magnets. When the diaphragm moves the coil also moves up and down producing a small AC current, mimicking that of the sound wave.

To try and make this easier to understand, imagine the sound wave being like a wave on the water that you create by splashing, and then imagine the metal coil as a cork bobbing up and down on the surface as each wave passes it……I hope that makes sense.

Dynamic microphones are capable of withstanding high sound pressure levels. This makes them ideal for recording loud sounds or for use in a live setting. They are also extremely reasonably priced due to their fairly rudimentary design and they can withstand a lot of wear and tear. This is one of the reasons they are the most frequently used microphone for live performances.

This durability becomes a limitation of dynamic microphones in some situations.

The coil has a certain weight to it and therefore if you make a quiet sound or perhaps a sound of particularly high or low frequency, the coil will not vibrate sufficiently to produce an accurate representation of the sound.

So in a studio, where you aren’t worried about sounds being particularly loud, and where you want to record the intricacies of your vocals. A dynamic microphone may not be the best fit.

And that is when you may need…….a condenser microphone

What is a condenser microphone?

Used for: quieter more complex sounds with a greater range of frequencies

Unlike dynamic microphones, condenser microphones are capable of capturing those much quieter sounds with a high degree of accuracy.

A condenser microphone also contains a diaphragm, which is usually made of very thin metal and another piece of metal called a backplate. Electricity is applied to both of these creating a static charge between them.

Once a soundwave hits the diaphragm it vibrates and produces a small electrical current.

As you may have noticed I said that electricity is applied to the diaphragm and backplate. So this means that you need electricity for a condenser microphone to work, whereas you don’t for a dynamic one.

The amount of electricity required ranges from between 9 and 48 volts. For this, you will either need batteries in the microphone itself or something known as PHANTOM POWER!

What the heck is PHANTOM POWER?

No, phantom power isn’t some kind of mysterious force produced by ghosts floating around in your home studio. It simply refers to the tiny amount of power needed to make the diaphragm move. This power usually comes from your audio interface or pre-amp. You will usually find a phantom power switch on them like the one below. 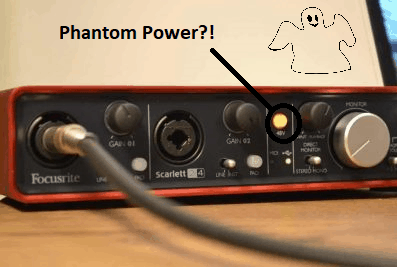 If you want to understand more about why dynamic microphones don’t need phantom power check out this article I wrote on the subject.

A ribbon microphone shares I mean emore similarities with a dynamic microphone. It differs in the fact that is has a thin ribbon (hence the name) of aluminum, rather than plastic as the diaphragm.

Ribbon microphones are not very common these days. They are expensive and are extremely fragile. Even a light breeze could break one.

What is the difference between small and large diaphragms?

As I explained above the diaphragm is used in the microphone to vibrate when sound waves hit it.

In condenser microphones, you will often see a choice between having a small diaphragm or a large diaphragm. But what difference does it make?

All you really need to know is that large diaphragms, due to their size, are better at picking up lower frequencies. Whereas smaller diaphragms can more accurately capture higher frequencies.

So decide on what you are trying to record before choosing. If you mainly want to record vocals or more bassy sounds then a large diaphragm is usually best. But if you want to capture a high pitched flute or violin then a small diaphragm may be what you want.

This is why I wanted to write this article. The amount of confusing words that you see when shopping for one is quite overwhelming.

Another pair of words you may see are ‘omnidirectional’ and ‘cardioid’.

It is actually quite simple though, omnidirectional means the microphone captures sounds from all around it and cardioid only captures sound directly in front of it.

Omnidirectional mics are great when you are looking to get the sound of the instrument/ voice but also the sounds of the room too. If you are recording in a church, for example, you may want the echoey sound of the hall and therefore you will want to capture sound waves coming from all angles.

In contrast, a cardioid microphone is used when you only want to record the direct sound of your voice or instrument. This is why you will often see them on a snare drum for example. You just want to capture the sound of the snare and not the sound of all the cymbals and other drum pieces crashing around it.