No director is as well known, nor has had as much success in Hollywood as Steven Spielberg. He invented a style of filmmaking that audiences ate up in the 1980’s, single-handedly invented the modern blockbuster, and was influential in helping George Lucas make Star Wars. From a young age, Spielberg was fascinated by theater and film. In his teens, he used an 8mm camera to film movies with his friends. Later, he became an intern at Universal Studios, and the rest is history.

Spielberg’s career started small. First he directed segments of TV shows, and then later entire episodes. His success convinced the studios to give him a chance at directing a full film. Duel was his first feature-length film, made for TV, and was an immediate success showing his technical competency, as well as, his ability to make entertaining cinema. His feature-length debut was The Sugarland Express (1974), and his breakthrough followed in 1975 (Jaws). He turned down the opportunity to direct a sequel to make another hit, 1977’s Close Encounters of the Third Kind, which gave him his first Best Director Oscar nomination. The hits kept coming, with Raiders of the Lost Ark in 1981 and E.T. in 1982. He finished the 80’s producing a number of big hits while directing two more Indiana Jones films, and the critically acclaimed The Color Purple (1985) along with Empire of the Sun (1987). In the 90’s he continued his proficiency at directing both entertaining blockbusters (Hook, Jurassic Park 1 + 2), and critically acclaimed dramas (Schindler’s List, Saving Private Ryan). In 2001, he directed a film as homage to Stanley Kubric (A.I.), then created two entertaining films in 2002 that resonated well with audiences (Minority Report, Catch Me if You Can). War of the Worlds (2005) was his next big hit, before he returned to the Indiana Jones franchise (Kingdom of the Crystal Skull, 2008). His first animated film was 2008’s The Adventures of Tintin. His latest films were a pair of dramas. War Horse in 2011, and the award-winning Lincoln in 2012.

So the question posed is, if you are watching a Steven Spielberg film and you don’t know it, what are the things to look for that would identify it as such? Here are five of Spielberg’s trademarks as director, in no particular order:

When a film technique has an unofficial name based on the director who first made it famous, you know it is a big deal. “The Spielberg Face” was first used to great effect in Jaws. The idea is simple, zoom in on a character as they are looking at something. Most of the time, this character is amazed, and their face is full of surprise, and the thing that they are looking at is not revealed to the audience until after the character shows their expression. To contemporary audiences today, this technique might not seem that special. Lots of other directors and filmmakers have since used something similar in their movies. Spielberg, though, was the first to show how effective it could be. By focusing on characters’ faces first, rather than filming from an angle behind them, Spielberg’s films could create a better human connection. He was showing that, although special effects have their place, his films were about people above all. “The Spielberg Face” is present in almost all of Spielberg’s films, including the dinosaur reveal scene in Jurassic Park, frequently in Close Encounters, and even in The Color Purple. 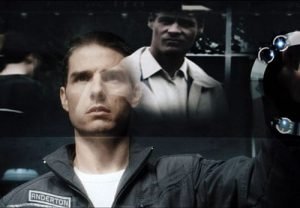 Spielberg is known for using complicated camera movements and angles. One of his favorite camera angles is using a mirror or window reflection to capture his characters indirectly. He uses this technique to show the face of a character when the camera is located behind them. This allows the audience to see the details of a scene/setting without losing the connection to a character. Spielberg also switches it around by filming a character who is facing the camera through a window. Typically the character is watching something through the window, and that scene is reflected for the audience to see. Spielberg also uses rearview mirrors in cars to frame and show action, such as in Jurassic Park when the T-Rex is chasing the Jeep. In Munich, Spielberg uses several complicated shots with reflections in car mirrors to show activity inside cars while also allowing the audience to see what is happening outside the cars.

Just about every main character in a Spielberg film either has some sort of issue with their parents (usually the father), or they have kids with whom they don’t have the best of relationships. This trend starts at the beginning of his career. His second film, The Sugarland Express revolves around two deadbeat parents running from the law to try and prevent their son from being taken into foster care. Close Encounters is full of neglectful parenting, and I don’t think I even need to talk about The Color Purple. More famously, we all know about Indiana Jones’ rocky relationship with his father from The Last Crusade, and then in Kingdom of the Crystal Skull it’s Indiana’s turn to experience the difficulties of being a dad. The kids in Jurassic Park conveniently lack parents, and War of the Worlds is basically Tom Cruise’s attempts to reconcile with his kids. And these are just some of the examples…

Like many directors in the 80’s, Spielberg experimented with the visual texture in his films. He may have been one of the first to perfect the technique of using bright lights to add ambience to his films. In specific, his use of camera filters and overlays in Close Encounters paved the way for a decade of soft filters and lense flares in film. Like Ridley Scott, Spielberg used light to add texture to his films. He used fog to amplify the effect of light bands, and used post-production effects to expand the glow of various lighting elements. He maintained these techniques in later decades, but with less emphasis and better clarity. Jurassic Park is full of interesting background lighting, especially once the storm hits. Minority Report is an interesting canvas of dark and bright, glowing lights, as is A.I. Even in Lincoln, Spielberg pays special attention to the contrast between the dark and drury, and bright, glowing white light.

While Spielberg’s films are known for their entertaining stories, relatable characters, impressive production values, and attention to detail, it is the soundtracks that make them the most memorable. No other director has made so many films with soundtracks that are as easily recognizable. But while some of that is due to the director’s choice of where and how to put music in their film, most of that credit has to go to John Williams. John Williams is one of, if not the best composers of film soundtracks. One note of the theme from Jaws, Star Wars, or even Indiana Jones is enough for most people to recognize these films. John Williams and Steven Spielberg have created a working partnership unparalleled in the film industry. The substantial amount of success that they have achieved is due to both of them being very good at what they do and their work complimenting each others’ very well. Williams has composed all of Steven Spielberg’s films except for one (Color Purple).